During the Tokyo 2020 Olympic and Paralympic Games (held in July and August/September 2021), representatives from future Host Cities of the Games have been learning first-hand how they operate by going behind the scenes of the live events and hearing from the people running them in briefings and discussions through an innovative learning initiative called the Games Experience Programme (GEP). The GEP is a collaboration between the World Academy of Sport (WAoS), the Information, Knowledge and Games Learning (IKL) area within the International Olympic Committee (IOC) and the International Paralympic Committee (IPC).

One of those representatives from the future Host Cities attending the Tokyo 2020 GEP is Lambis Konstantinidis, the Director of Planning and Coordination for the Paris 2024 Olympic and Paralympic Games. The important area of Information, Knowledge and Games Learning (IKL) also lies within his area of responsibility.

Konstantinidis has been involved in the Olympic and Paralympic world since working at the Athens 2004 Organising Committee. Konstantinidis has held different roles in most Summer and Winter Games Organising Committees ever since, with a focus on international relations, athlete services, planning and the Paralympic Games. He joined the Paris 2024 Candidature process as Head of Sport and Paralympic Integration and transitioned into his current role following the election of Paris as the successful Host City in 2017.

At the time of writing this article, Konstantinidis had completed the Olympics Games component of the GEP and was looking forward to the Paralympics element starting a few days later. He spoke about the benefits of the GEP to participants such as himself. “There is now a wealth of data on how the Games are organised, thanks to the well-planned transfer of knowledge programmes,” he says. “The opportunity to see those plans in action and witness first-hand the scale and challenges of the operations, however, is a true eye opener for anyone. It really helps put things into perspective and reveals the true dimensions of the task that lies ahead.”

Konstantinidis says that there are several interesting lessons he has taken from the Tokyo 2020 GEP so far, but if he needed to summarise them in one word, he would choose “resilience”. He explains: “The way our Japanese colleagues took a plan that was painstakingly developed over seven years and adapted it to this unprecedented context to deliver an excellent Games, is truly admirable. It comes to demonstrate that the best plan will not be enough, if not complemented with flexibility and creativity once you hit the final stretch.”

Looking ahead to the Paralympic Games component of the GEP, Konstantinidis says that a key advantage of hosting the two Games together is for the Paralympics to benefit from the infrastructure and planning put in place for the Olympics. “[However], this can only be maximised if Paralympic requirements are taken into consideration at the right time and not as an afterthought. This is what we are trying to accomplish across the entire Paris 2024 project. In our plan, transition [between the Olympics and Paralympics] should really only be about finishing touches and refreshing the stage for the Paralympians.”

The GEP was first incubated by WAoS at the London 2012 Paralympic Games and has gone from strength to strength in each subsequent edition of the Games. The Tokyo 2020 GEP is now a fully-integrated programme that provides opportunities for participants to demonstrate their passion for the learning and sharing of strategic and operational knowledge around the delivery of both the Olympic and Paralympic Games. The programme has over 130 sessions including site visits, roundtable discussions, expert hours, morning talks and various other activities.

What the GEP highlights in particular is the abundance of diverse roles that people working in the Organising Committee of an Olympic and Paralympic Games undertake, whether full-time, as a contractor or as a volunteer, drawing on a wide variety of skills, competencies and specialisms from areas such as technology, energy, logistics, transport, communications and security through to marketing, branding, protocol and hospitality.

Within the Olympic and Paralympic Village alone (where the athletes live during a Games), roles of importance to its successful planning and operations include those in accommodation, services and recreational activities as well as in urban planning, construction, overlay, logistics, sustainability and legacy.

The Olympic and Paralympic Games are events that truly offer something for everyone, providing memorable opportunities to work as part of the ‘Greatest Festival on Earth’.

A degree purpose built for the growing sports industry

While the sports industry continues to grow worldwide, the bachelor of International Sport Management sets to address the growing need for qualified and passionate sport professionals. 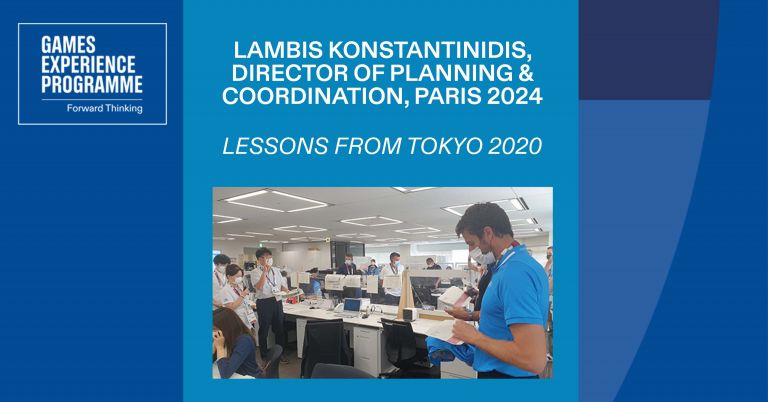 Konstantinidis says that a key advantage of hosting the two Games together is for the Paralympics to benefit from the infrastructure and planning put in place for the Olympics.

Studying doesn’t have to mean giving up on your passion for sport. The two can work together, side by side - even at an elite sporting level.